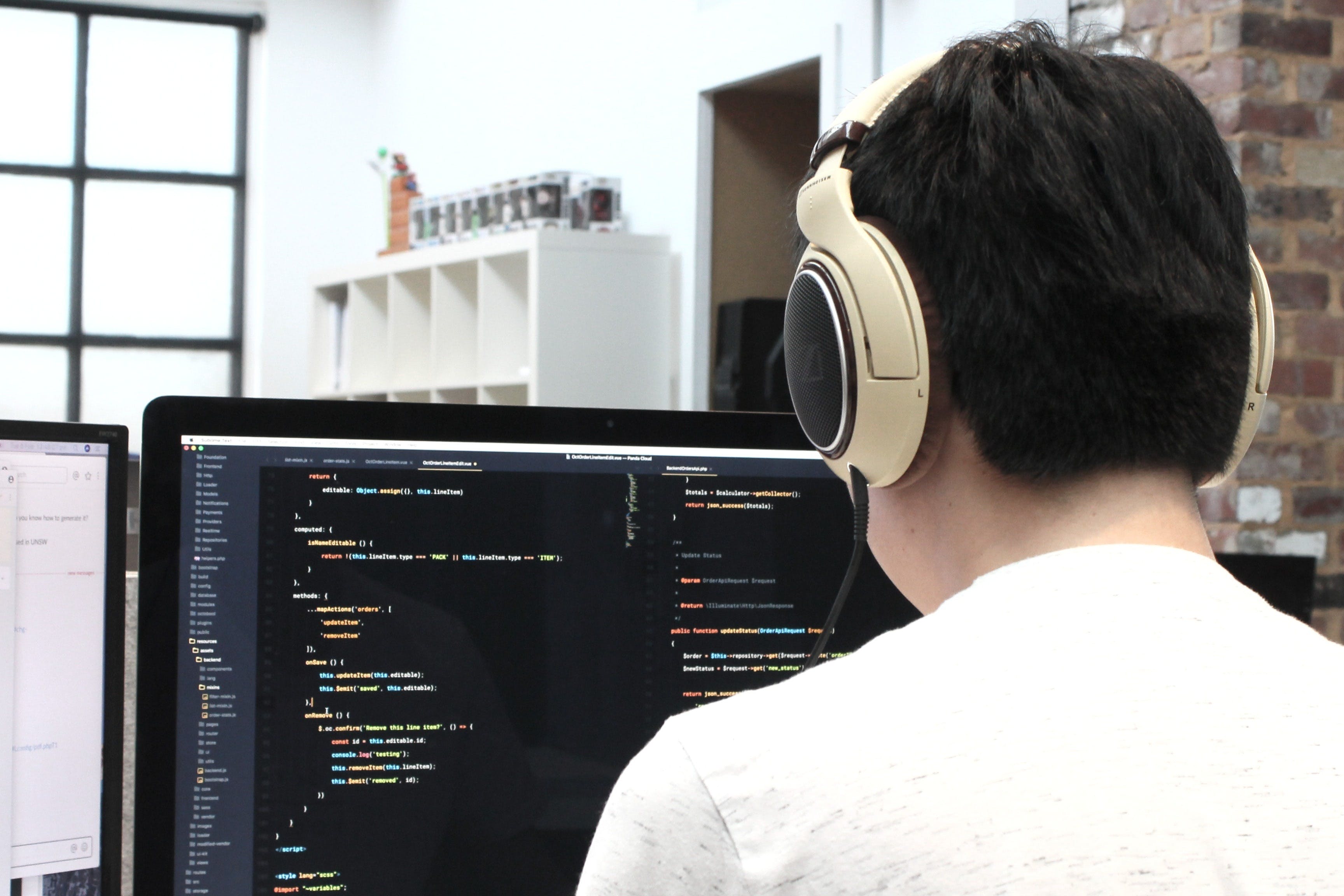 Director of Engineering at Front

Director of Engineering Sean Xie shares his journey and learnings from his career so far—from authoring research on cell tissue imaging, to writing code.

Over the years, I’ve found it immensely helpful and inspiring to hear about and learn from the career journeys of others. As I cross the first decade of a40-year career journey, I thought I’d share the story of mine, the choices I’ve made, and some of the lessons I’ve learned along the way.

1. Be bold, deliberate, and forward-looking with your career choices.

I majored in Biochemistry and Economics in college and had laid the foundations for pursuing Chemistry in graduate school. Look, I was a co-author of a chapter in a book ontissue imaging 😂!

I share this with you as a representation of how wildly different the seeds of a career I was actually planting a decade ago than the one I’m pursuing today in engineering, but also to myself as a memory of an important milestone in my career journey—this was the last project I ever took on in the field of Chemistry.

After college, I began to notice that I wasn’t energized by my work; I was doing it simply because it was the path of least resistance. There were several reasons why I wasn’t happy, but I mustered the energy to focus instead on what might make me happy, or what was important to me in a choice of career. This is the same approach I took over the years when making similar decisions—to understand what I am running toward, rather than what I am running away from. I made a list that I still remember well today:

As you can guess, I figured a career in software engineering and startups might fulfill these items. The real question was: how do I find my way into the industry? I needed to equip myself with the right skills to land a job. An obvious next step was to teach myself what someone might learn in a 4-year undergraduate curriculum in computer science.

2. You can learn something new if you put your heart to it.

What’s your biggest takeaway from college? I’ve posed this question to many people over the years, and if there is a consistent theme, it’s that for most, it wasn’t the actual material learned in their classes. For some of you, my answer might resonate—the most important thing I got out of it was learning how to learn:

It is with this spirit that I embarked on an arduous, yet exciting journey. Below are some examples of how I invested my time. You may be disappointed yet encouraged to see that these were everyday efforts that anyone can pursue:

You may wonder what I think of bootcamps, and whether I considered enrolling in one. I did not; bootcamps weren’t readily available then, and I had other ongoing work obligations. That said, I believe bootcamps can be helpful to others looking to transition into writing software like I did, and I have seen successful careers built off those foundations. I’ve observed that the more successful bootcamp graduates tend to recognize that bootcamps aren’t a magic wand. They learn the how on top of the that, they know that there is no substitute for mastery through hard work, and their motivation for pursuing software comes from within. For them, the learning doesn’t stop after the bootcamp; instead, it is just the beginning. I know this well—after more than a decade in the industry, I am still learning, every single day!

3. Gravitate towards people who believe in you.

These first few years after college were particularly challenging as I navigated a wild career pivot, and I would not have found my way without the support of many people along the way:

Would I be doing what I am doing today without some of these folks taking a leap of faith on my ability to deliver? Certainly not. Did they know for sure I would deliver on their bets? Absolutely not. As I find myself in positions where I can create opportunities for others, I try to do the same. Sometimes, all someone needs is someone else taking a leap of faith on them.

Unsurprisingly, I had my fair share of detractors along this journey:

Gravitate to those who believe in you, especially those who are willing to take a leap of faith on you.

In early 2014, I followed my heart to Silicon Valley, the center of gravity of hi-tech startups, when I joined a fast growing post-Series B startup that was TellApart. I don’t think I was aware or particularly deliberate about it then, but what led to a fruitful several years at TellApart and post-acquisition Twitter journey was my willingness to help solve problems.

Less than a month in, our self-hosted code review toolGerrit broke, and a good number of engineers on the team, myself included, naturally screamed in annoyance. At first, a restart of the tool appeared to fix it, but then it began to crash more frequently. No one officially owned Gerrit, so no one devoted time to look into the cause of the crashes. One day, I had enough, and decided to figure it out. Its cost on our 50-person engineering team’s productivity justified the time I was going to spend on it. I recall pouring over Gerrit’s source code, performing manual Gerrit database operations, and upgrading the version of Gerrit we used—each of these contributing to increased stability of the tool. I was new to the team, but others saw my willingness and ability to step up and problem solve, and it earned me a healthy bit of respect that I continued to build upon to gain more responsibility over the years.

I became the unofficial Gerrit (and through similar circumstances, Jenkins!) owner over the course of my tenure at TellApart and Twitter. I think it was only as I left the team as a tech lead of a team of awesome engineers that owned one of the highest traffic services at Twitter—log ingestion @ 3M RPS peak traffic—that I recognized much of the growth I accumulated over the years could be attributed to the relentless solving of problems I identified along the way. What’s even cooler was that I got to learn something new with every problem I solved!

5. Surround yourself with people who push you to be the best version of yourself.

TellApart and Twitter was an incredible journey, but there came a time for a new adventure: a bigger challenge. It gets harder to top every exhilarating ride you take, but I would not settle for less. I spent 9 months passively then actively looking for new opportunities; I researched more than 50 startups, interviewed with several, and eventually agreed to join Front.

These were some of the major factors I considered in making this decision:

All of these were important, but the factor that tipped the scales in favor of Front was the people and how they would push me. The extremely talented individuals I was lucky to be surrounded by over the early years of my career brought the best out of me and pushed me to grow more than I would have in other environments. And when I saw Front and its team of hyper-intelligent, ambitious, hungry individuals that were also humble, caring, and knew how to have fun, I knew it was my next professional home. By the way, many of these qualities are baked into Front’scompany values today!

While many ambitious individuals seek environments that push them to be better, I’ve noticed that fewer actively think about the responsibility they subsequently inherit to make their new professional homes equally or more attractive to future teammates. If you aren’t able to contribute to attracting top talent to your team, you are reducing the capacity of the company to attract top talent over time. The best thing you can do for your career is to help create a talent flywheel, wherever you go.

The obvious opportunity you will have in creating the talent flywheel in any company is through its hiring process. Think about the personal traits of yours that tend to attract others to work with you, and participate in the parts of hiring that allow you to showcase those most. Proactively work on areas that you fare worse in.

Over the years, I’ve observed that many individuals who want to move into management or are already in management in fast-growing companies do not invest enough in this skillset, which not only hinders their ability to succeed as a manager, but hurts the company, since team building and hiring are priorities in such environments. A suggested thought experiment: think about whether you are able to attract former co-workers to your current company. After all, if those who have seen you in action aren’t drawn to work with you again, why might someone you don’t have a prior relationship with do so?

I don’t think I am where I want to be as a talent magnet yet, but I am encouraged by the teams I have been able to build over the years.

7. Invest time in growth within companies.

I have been at Front for over 4 years now, which makes it the longest length of time I’ve worked at a company. I often get asked—what keeps me at Front? There are a few reasons:

The factor that many of us will have the most control over is identifying and riding S-curve learning opportunities, so I thought I’d share a few more of my thoughts on this:

As an aside, two ideals I’ve strived toward when leaving companies are:

Finally, to drive home my point about investing time in companies:

I took a compensation hit when I joined Front: I left behind the liquid compensation of a public company including a good chunk of unvestedTellApart acquisition dollars on the table. I certainly can’t claim or suggest that this choice is the right decision for others—we each have our own financial situations to consider. Moreover, there are a significant number of non-financial factors going into a decision like this. The point I am hoping to make, however, is that I was able to confidently make this decision for myself because I was thinking long term:

So far, I am grateful that long-term thinking is paying off for my career.

How will your 40-year career look?

…and that is the story of the first decade of my career! I wrote this both as a way to share my journey with you, as well as to remind myself of some of the lessons I’ve learned along the way. Whether you connect with some or none of my professional journey, I appreciate the time you took to learn about mine, and I hope reading it did in one small way or another help you think about yours.

I mostly hope it inspires you to recognize that, whatever your purpose or motivations and wherever you are in your career, that while your managers, mentors, HR professionals, career frameworks, ladders and advice can be along for the ride, that only you can truly captain your career, and to start doing it today if you haven’t already!Dream big, and never stop believing in yourself.

Of course, what is a blog post on Front Page without a plug? 😃 If you’re interested in making Front a part of your career journey, check out ourjobs page.