CC is dead. Email comments are in.

CCing is a thing of the past. Email comments are the more efficient way to collaborate on email with your team.

CCing is a thing of the past. Email comments are the more efficient way to collaborate on email with your team.

Remember when people used carbon paper to simultaneously make several copies of the same document? Neither do I, and that’s probably because it was patented in 1806 when people actually wrote things on paper.

The carbon copy is still around though. Today we owe carbon copy’s creator, Ralph Wedgwood, some credit for a term we use all the time: CC.

Unfortunately for Ralph, we took his technology and tried to adapt it to email. Given the pace and collaborative nature of modern day work, the concept doesn’t work so well.

CCing makes it hard to pinpoint what information you’re trying to pass on. You end up giving everyone else a million emails to look at. And if you CC a customer on a long thread, they may even read some internal comms you wished to keep, well, internal.

The email CC is an imperfect way to communicate with customers and internally with our teams. What’s the solution, then? Email comments. 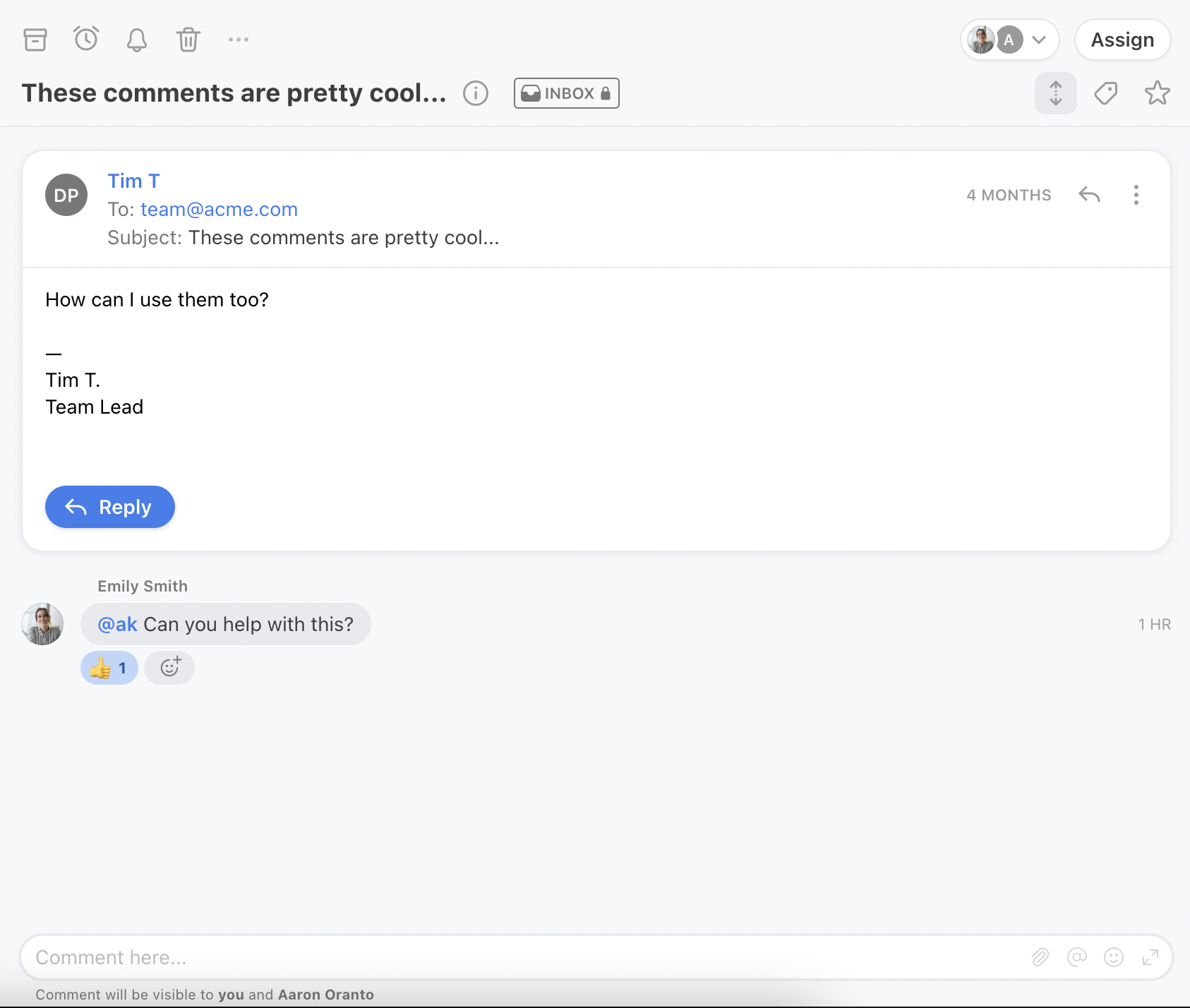 For one, CCing can negatively impact company culture. Harvard Business Review researched the “CC effect” to see how copying in managers and team members into emails affected the workplace. The study found that instead of creating transparency, the email CC was feeding a culture of fear and reducing trust. Yikes—but the issue is even larger than this.

Let’s travel back in time and revisit the original goal of CCing: to enable you to let others in on information in an email and potentially discuss said information with them.

Email overload: When people are getting included on email threads left and right, CCing creates a great deal of email for everyone involved.

Confusion and wasted time: When you’re CC’d in the middle of a conversation, email threads can be very difficult to read and orient yourself in. You spend time scrolling around trying to find what part is relevant to you and gather context.

Accidental communication to customers: When you’re emailing with a customer, partner, or someone outside your team, it’s easy for a CC’d internal conversation to accidentally get sent out to everyone. This not only looks unprofessional, but in some instances can let confidential information get leaked.

For this last issue, many companies try to remedy it through internal chat, like Slack or Teams. This is still a problem:

If you Google the term “email CC,” it’ll show you page after page of blog posts explaining the etiquette around CCing. You’ll read fierce debates about when and where you should use CCs. Then, there’s the think pieces about when you should move to BCCing, tips on making sure you don’t accidentally CC in a customer, the list goes on.

The fact that there needs to be such detailed etiquette around CCing means there’s an intrinsic issue with the CC function itself. Our solution is changing CC entirely by giving you a new way to communicate with your team internally: email comments.

Email comments do exactly what we all aimed to accomplish with CC, without creating all the problems that happen when you move that conversation to internal chat. Think of it like taking email and chat and blending them together into one.

1. Everything is kept in one thread

Emails can get messy. If you’re working on a project and need to keep your team informed, you’ll be CCing them into lots of different emails and threads. Switching to email comments keeps everything to a single thread: attachments, comments, and important context is kept in one spot. Everything.

Think about it like this. When is the last time you needed to tell a team member about something important you read in an email? You probably CC'd them into the email or jumped over to Slack or Teams to explain the situation.

Instead, if you could leave a comment on the email instead, you can tag a team member into a thread to alert them to parts of a conversation. And if they can’t find what they’re looking for, they can simply use the search function in their inbox.

With Front’s email comments, you can tag any team member you need into a conversation using @mentions, and then you can add formatting like bold, italics, and quotes to your comments. You can even add an emoji, no problem.

The average person spends 28% of their work week on email. We know showing statistics isn’t going to make you feel better about it or shrink the weight of your inbox. What you can do is find a way to optimize the time you’re spending in your inbox. Moving to email comments condenses the way you can deal with emails in three steps: share, ask a question, move on.

What do we mean by that? Well, all that time spent in our inboxes is doing stuff like sifting through email threads and chat channels, or writing out detailed comments about what we need a teammate to know in an email we’re CCing them in on.

Instead, commenting on an email means you can just @mention the teammate, and they can read the whole thread for themselves. “What do you think of this?” Without worrying about getting that internal conversation accidentally sent to the customer.

And, if something is super important, you can pin it at the top of the thread, @mention your teammate to tell them to look at it ASAP, and then move on. Here's how it looks in Front: 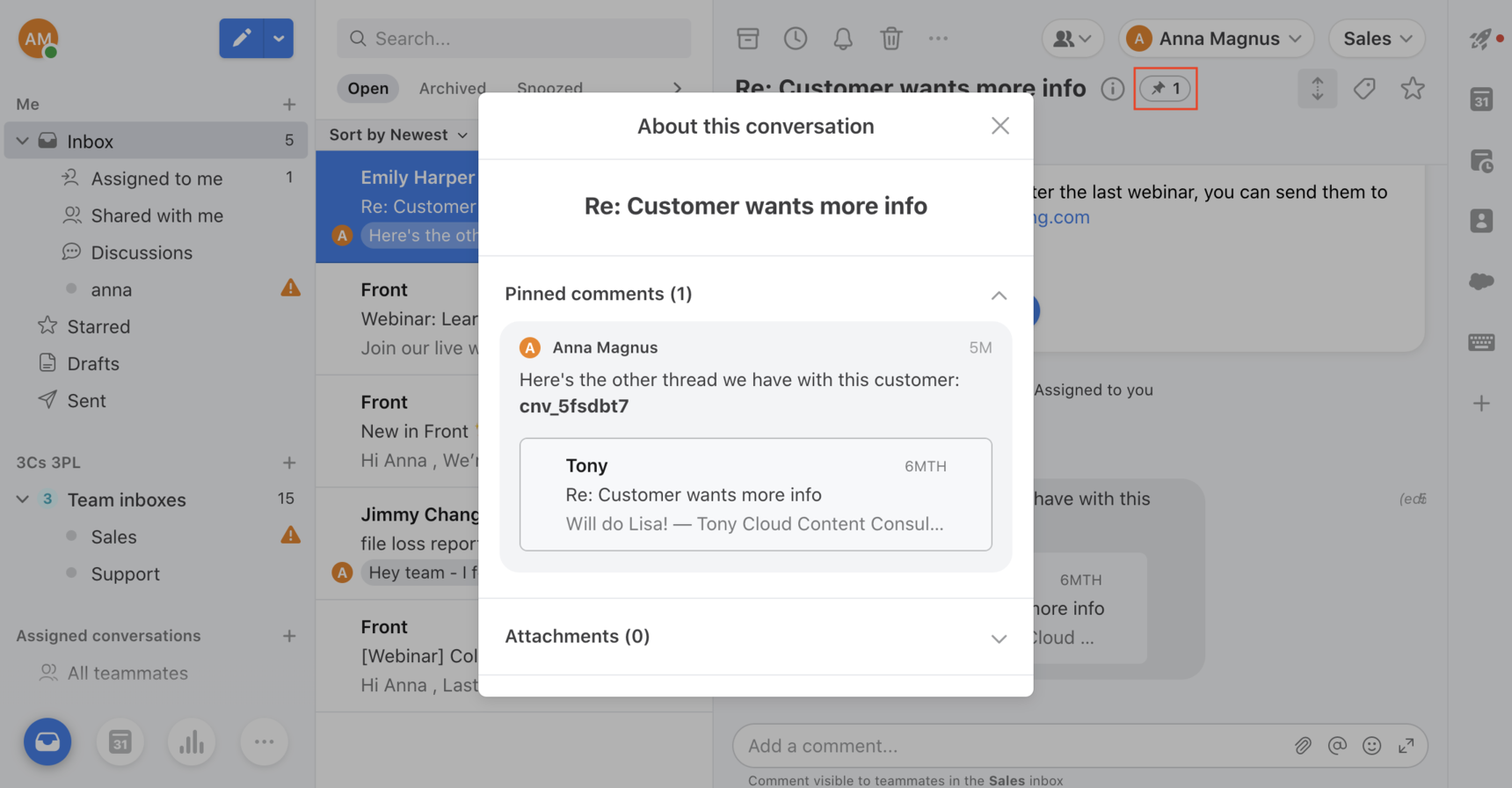 In this example, a customer needs help. Instead of CCing a customer support member into a long thread and having them read every piece of the conversation, you can use the comment section to summarize the situation so they can deal with it quickly.

When they open up the conversation, your pinned message is the first thing they’ll see. Because you've highlighted the customer's main concern in the pinned message, your team member will better understand the situation and solve your customer's issue easily and quickly.

3. Everything is kept internal

When CCing goes wrong, it goes really wrong. Way back in 2007, Christy and Jim Boswell booked a flight with Spirit Airlines from Orlando to Georgia. The flight was delayed by 3 hours, and they ended up missing their concert in Atlanta. After two calls to Spirit Airlines didn’t resolve the dispute, the Boswell’s did what any disgruntled customer would do—they emailed and explained their situation.

And… it didn’t go well. The company's CEO, Ben Baldanza, was CC'd into the customer complaint. Instead of replying to his team internally, he accidentally hit "Reply All" and sent this delightful message back to the Boswells:

“Please respond, Pasquale, but we owe him nothing as far as I’m concerned. Let him tell the world how bad we are. He’s never flown us before anyway and will be back when we save him a penny.”

This is the danger of email CC. Communications that you thought were going to remain internal can become public in a single (mistaken) click.

With email comments, you never have to worry about customers accidentally seeing your internal chit chat. Just @ your team member to link them into a conversation, ask them questions, get them to follow up on a customer query. 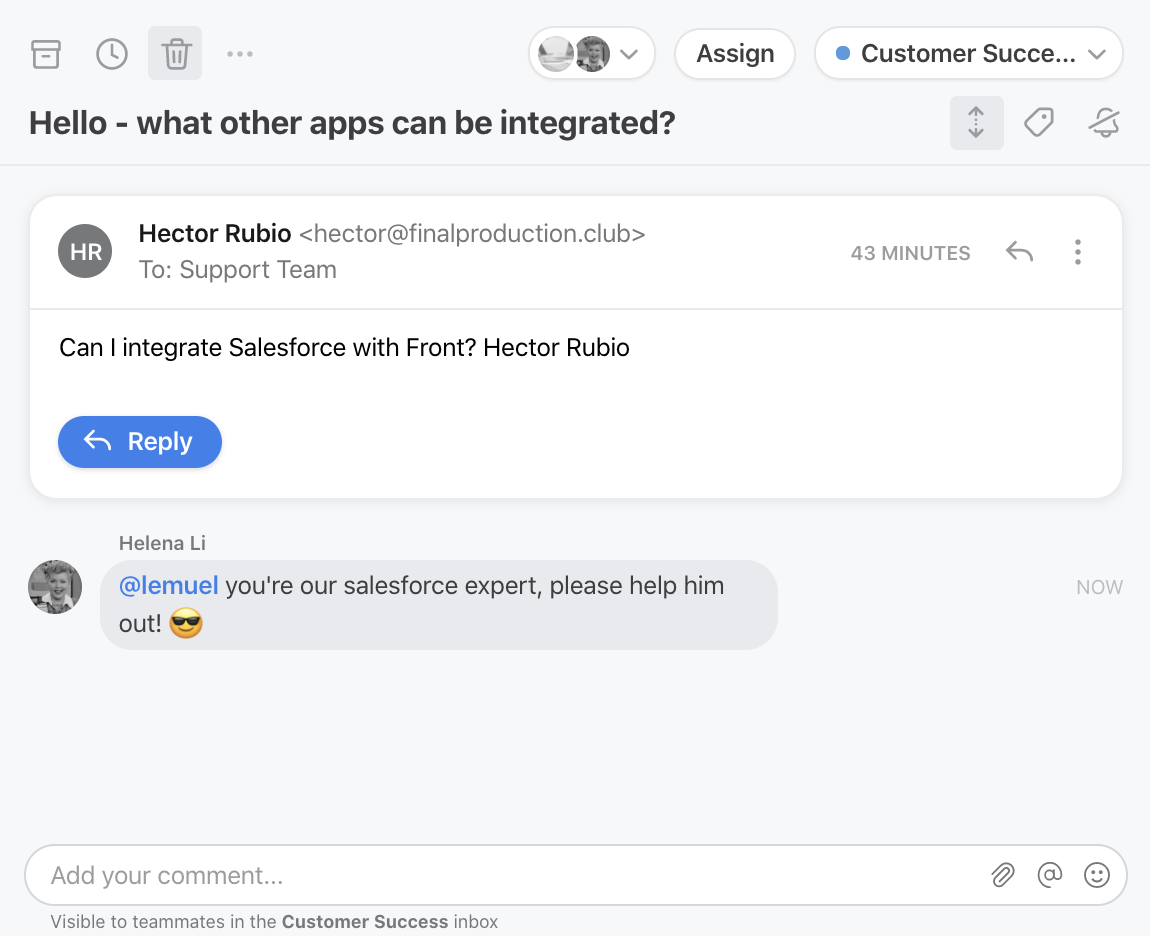 The best part? There is no chance—nada—that your customers will see any comments or be forwarded information that’s not for their eyes to see.

4. You can collaborate on replies in real-time

Teams collaborate on just about everything in real time. Maybe it’s product designs in Figma or marketing campaigns in Google Docs or Dropbox Paper. So why not collaborate on emails?

If you’re trying to do that now, the process looks like this: either you’re CCing in a team member to an email and asking them for suggestions, or you’re both editing a Google Doc and then transferring it over to an email.

Even if this happens to be your system, it's time-consuming, and you'll have to keep switching between programs when collaborating on the draft.

There’s a better way. Rejoice. You can share drafts to edit together. In Front you can jump in and out of an email draft in the exact same way you do with a Google Doc. Front's shared drafts allow you to loop in a teammate, ask for their help on an email, and see their suggestions in real-time:

Each time a comment is made, it’ll appear in the thread so everyone who has will be able to see it. Dealing with tricky customer complaints or product questions has never been easier.

We know old habits die hard, and email CC has been around just about as long as email itself. Yet, there's a better way to pass important information onto team members or handle customer queries. Hint: it's not carbon copying messages into everyone's inboxes and asking them to scroll through it all.

And don’t worry. The ability to CC is of course still there in Front like regular email. So if you’re having a customer conversation where that makes sense or want to loop in an external partner, you of course can do so. But all your internal chatter? It’s all in the comments.

Collaboration can be transformative. When your team works together, “I did it,” becomes “We did it!”

Remote work means trying twice as hard to get the team to interact. But cheesy icebreakers on Zoom aren't the only option.